The Charitable Infirmary was the first voluntary hospital in Ireland and Great Britain. Down through the centuries it has been witness to the social and cultural vicissitudes of a city that saw the splendour and poverty of the Georgian era, the depression following the Act of Union; the excitement of Catholic Emancipation; the industrial and scientific progress of the Victorian age; the misery of the Great Famine; the Easter Rebellion and the Civil War; and the dramatic social changes that continued into the twenty-first century. The Charitable Infirmary Charitable Trust continues with the benevolent work of its founders.

In 1718 six Dublin surgeons, appalled by the miserable conditions of the sick poor in the city, opened the first voluntary hospital in the United Kingdom of Great Britain and Ireland in Cook Street, Dublin. The hospital, accommodating only four ‘maim’d and wounded poor’ of the city, was founded by Francis and George Duany, Patrick Kelly, Nathaniel Handson, John Dowdall, and Peter Brenann. The motto chosen for the hospital was Soli Deo Gloria. One year later the Westminster Hospital, the first voluntary hospital in Britain, opened in London. 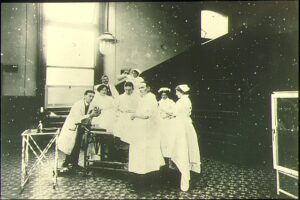 The demand on the Cook Street hospital and its surgeons was such that they sought the help of charitable persons who, as they put it ‘came cheerfully into an annual subscription, to be continued during pleasure, for the support of such real objects of compassion and charity.’ With increased funds at their disposal, a house in Anderson’s Court was rented for £14 a year. The date of opening of this hospital is not known, but it was probably about 1724. It provided only eight or nine beds, but these were soon filled with ‘the greatest objects until cured.’ Two or more of the founding surgeons gave their attendance moved to larger premises on Inns Quay in 1798, where it was possible to accommodate 50 patients. 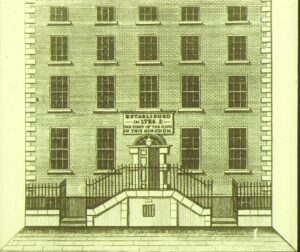 In acknowledging the important contribution of the voluntary hospitals to the city, the altruism of Dublin’s medical families should not be allowed to pass unforgotten. The denizens of the capital owe much to those six surgeons who began it all with the Charitable Infirmary, to Dr. Richard Steevens and his devoted sister, to Mary, daughter of Dr. George Mercer, to Bartholomew Mosse, the founder of the Rotunda, the first maternity hospital in these islands, and to Sir Patrick Dun, whose hospital closed in 1986. All of these voluntary hospitals were funded by public subscription and monies raised at charities. The surgeons and physicians gave of their time without charge. Though the voluntary nature of these hospitals has altered considerably over the years, the ethos of the voluntary hospital movement has survived to the present and we are sadly now witnessing the end of this era, which has served our city so well for nearly three hundred years.

The Hospital on Inns Quay seems to have gone from strength to strength. Having been founded by surgeons, the emphasis in the hospital until comparatively recently, remained surgical.

The voluntary hospital movement inspired the wealthy citizens of Dublin to devote time to raising money in a number of novel ways. Bazaars, balls, musical events, lotteries, sedan chair- rentals and garden fétes were all devised to raise monies for the erection and maintenance of hospitals. One event, however, stands out from all others in the history of the times. Handel performed his Messiah for the first time, on April 13th 1742, in the Musick Hall, Fishamble Street. Seven hundred people attended, and so that the hall might accommodate as many as possible the ladies were requested to come without hoops and the gentlemen without their swords. £400 was collected for equal division among the Society for Relieving Prisoners, The Charitable Infirmary and Mercer’s Hospital.

When the plans for the new Four Courts were announced in 1786, it became necessary for the Charitable Infirmary to move on once more. The Earl of Charlemont, having just completed a mansion (now the Municipal Gallery) on Rutland (now Parnell) Square, vacated his old family mansion at No. 14 Jervis Street, which was purchased by the trustees of the hospital.

The charter was duly granted under the style and title of ‘The Governors and Guardians of the Charitable Infirmary, Dublin’, on June 7th, 1792 by George III. This prudent move by the governors left the hospital secure at the turn of the century. It could look back with pride to its development from humble origins almost one hundred years earlier and look forward with confidence to the future.

But soon the Governors of the hospital found themselves in a familiar situation. The house of Lord Charlemont had become dilapidated and was no longer suitable as a hospital. A subscription list was opened to which the merchants of the city subscribed generously and in 1804 the new Charitable Infirmary was opened. Over the door a large mural granite tablet was erected. 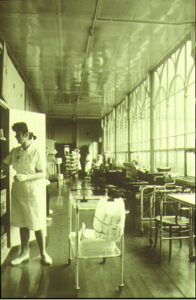 In 1852 the committee of management made the remarkable decision to invite the Sisters of Mercy to supervise nursing in the hospital. This decision was motivated by a desire to improve the standard of nursing in the hospital, and whereas it was recognised that the Sisters were not trained nurses, it was appreciated that they had ‘acquired an experience which renders them very efficient’. There was concern, however, that the Sisters might seek to influence religious practice in the hospital. At that time the rules provided free access for patients of every denomination ‘and empowered every patient to send at once, and without question for any clergyman whom the patient might desire to see’. These misgivings were set aside, however, in favour of the overall benefits that might derive from the organisation of nursing in the hospital. The members of the committee of management had every reason to be impressed by the achievements of the Sisters of Mercy. Catherine McAuley, heiress to a large fortune, opened the first House of Mercy at Baggot Street in 1828 and three years later the first convent was opened there. At the time of Mother McAuley’s death in 1841 the Sisters of Mercy had founded eight new convents in Ireland and two in England, and within ten years of her death convents had been established in Newfoundland, Australia and New Zealand.

Towards the close of the nineteenth century the demands on the hospital were such that the management committee had, once again, to direct their thoughts towards building yet another hospital. The large and extensive premises of the Dublin Carriage Company were acquired together with five houses in Jervis Street, and extensive foundations were laid at a cost of £1,235.

In 1983 the new hospital at Beaumont was completed and this was opened in 1987 incorporating the Charitable Infirmary and St. Laurences’s (The Richmond) Hospital.

Following the closure of the Charitable Infirmary, the Trust applied to secure the substantial assets of the former hospital site. On the 3rd March 1989, the High Court declared that the Governors and Guardians of the CICT should administer the sale and proceeds of the Jervis Street property under the Cy-Pres Scheme.

In due course, the CICT achieved a “good price” for the property which was subsequently redeveloped whilst retaining the facade into what is now known as the “Jervis Shopping Centre”.

The CICT Managing Committee then turned its attention towards managing and distributing the proceeds of the sale.  It did so by providing supplementary financial assistance to those causes for which it was originally established.

Over time, these included significant Capital Contributions (totalling in excess of €3 Million ) towards the following projects ;

Similarly, the CICT maintained its tradition of providing direct financial assistance towards the poor and needy of Dublin City centre. Over time, it has managed to route in excess of €3 Million to a variety of approved Charities which required urgent assistance from time to time. These have included:

Medical Grants and Bursaries to a value in excess of €4 million were made to Beaumont Hospital/RCSI during the period 1989 to 2021.

In summary, since 1989 the CICT has disbursed in excess of €10 million to Charities, Research, and various Capital Projects.